DownWind Yacht Sales has reported that: "Of all the vessels moored in Culebra's harbor, it was only their Beneteau that survived both Irma's Cat 4 hurricane and Maria's Cat 5 hurricane".

All other vessels either parted or dragged their mooring and washed up on shore as a result of the 180 + mph winds.

They've attributed the success to having had Boatmoorings.com install a mooring system that could withstand the forces of a hurricane.

Tommy Hill , owner of DownWind Yacht Sales & Million Air was beyond appreciative, given the cost of repair or replacement of his inventory of boats.

Seagrass meadows are an important marine habitat in support of our fisheries and commonly reside in shallow sheltered embayments typical of the locations that provide an attractive option for mooring boats. Research led by scientists at Swansea University provides evidence for how swinging boat moorings have damaged seagrass meadows throughout the UK (and globally) and create lifeless halos within the seagrass. The creation of these halos devoid of seagrass fragments the meadow and reduces its support for important marine biodiversity.

The seagrass Zostera marina (known as eelgrass) is extensive across the northern hemisphere, forming critical fisheries habitat and creating efficient long-term stores of carbon in sediments. This is the first research to have quantified this impact on eelgrass.

The study "Rocking the Boat: Damage to Eelgrass by Swinging Boat Moorings", was led by Richard Unsworth and Beth Williams at Swansea University where it formed the basis of Beth’s MSc thesis. The research was conducted in conjunction with Benjamin Jones and Dr Leanne Cullen-Unsworth of Project Seagrass and the Sustainable Places Research Institute, Cardiff University has been published in the Open Access journal Frontiers in Plant Science. 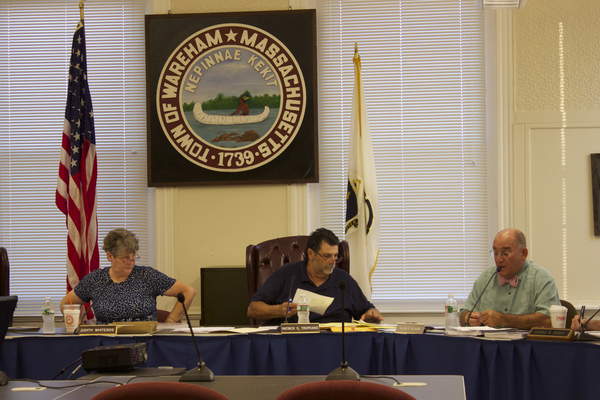 Wareham is going green in an effort to protect its underwater ecosystem, one of the town's most vital resources.

Selectmen approved a plan Monday to replace existing boat moorings with eco-friendly moorings to preserve underwater eelgrass habitats in town waters. Eelgrass is a protected resource that acts as a nursery for many types of fish and shellfish.

Harbormaster Garry Buckminster and Roseanne Joyce of the Massachusetts Port Authority presented their plan to Selectmen, and Joyce said the state is willing to fund a total of $155,000 to replace 62 moorings near eelgrass habitats at Tempest Knob and east of the Onset Pier. 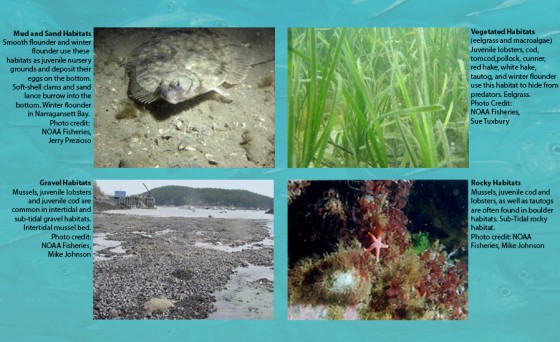 A new report by NOAA Fisheries documents the importance of shallow-water marine and estuarine habitats in the Gulf of Maine. The report summarizes what is known about the "functional value" (for survival, growth to maturity, and reproduction) of 8 different types of habitat for 16 fish and invertebrate species. 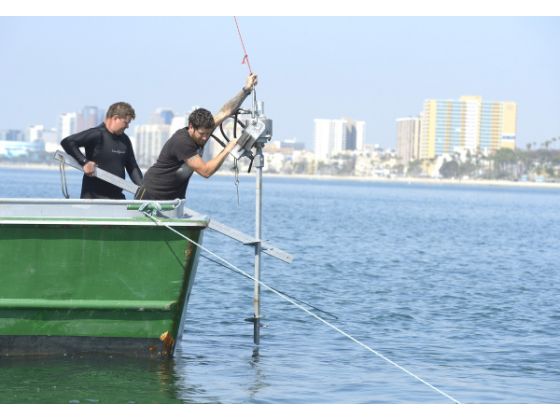 At Long Beach's Belmont Veterans Memorial Pier, Mike O'Toole is hoping he can lure some of the traffic making the 26-mile trek across the sea for a simpler, quicker getaway.

"They've got a great thing going in Catalina, and I think we can make something like it work here," O'Toole said, who has been working with pier operator Fred Khammar for the past five years on the mooring project.

Now, with the city's and California Coastal Commission's blessing, O'Toole can install up to 45 moorings along the west and east sides of the pier. He got a jump on the venture by installing nine moorings earlier this month.

Moorings have been in the works since a pilot program was put in place in 2008. City officials requested an environmentally friendly mooring system, which meant replacing the large anchor and heavy chain that make up conventional moorings. Both can end up damaging the ocean floor, as the anchor leaves a large footprint on the floor, and the chain can drag during low tides, killing nearby aquatic plants, kicking up sediment and dirtying the water in the process.

After initial test moorings using another system, which included a 10-foot-long helix anchor that screws into the floor led to some failings in the test mooring field, O'Tool decided to go with the Eco-Mooring System.

Clarification: This blog posted online on April 8, 2014, and updated June 23, reported on comments made by a Long Beach pier operator to the city's Marine Advisory Commission about his views of a pilot mooring program initiated in 2008. The operator told the Commission that hardware connecting boats to mooring lines proved faulty, leading to some failures, and that he had "lost all confidence in the equipment." Because the story included the operator's reference to "the Seaflex system" during his remarks to the Commission, some readers may have erroneously inferred that the hardware was provided or installed by Seaflex. Seaflex says that when problems arose with the largely non-Seaflex moorings, the company identified the problem with the hardware and installed, without charge, a Seaflex attachment system to the moorings, as well as three complete Seaflex systems, which have been in place without incident since 2012. 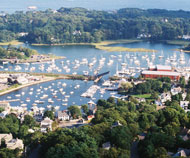 Due to a mitigation agreement with the Massachusetts Department of Environmental Protection and Army Corps of Engineers, MassPort has agreed to fund the installation of 70 environmentally friendly helix moorings in the outer harbor of Manchester by the Sea.

Manchester harbormaster Bion Pile and the 3 mooring installers that work in the area have determined that the bottom substrate in the outer harbor is compatible with helix moorings, which have a holding strength up to 5 times greater than traditional mooring anchors, and have chosen the Eco-Mooring System manufactured by BoatMoorings.com. 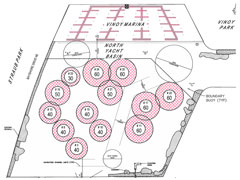 Mooring and anchoring have always been controversial subjects in Florida. Both are often discouraged because of the fear that visiting boats and vessels will damage the marine ecosystem, particularly the seagrass. But in the wake of new technologies, the state Fish and Wildlife Conservation Commission says that these controlled mooring systems could actually relieve the problem.

In 2011, the state of Florida chose four locations for pilot mooring fields with the expectation that boating would be easier and more enjoyable, while also encouraging more communities to use this method to preserve the environment. The commission chose Sarasota, St. Petersburg, St. Augustine and the Florida Keys (Marathon and Key West) for their three year pilot project. This would authorize local governments to set up mooring fields and enable them to develop and test policies for managing them. The legislature and the commission will evaluate the pilot programs this year and, unless the legislature decides that they are satisfactory, the mooring and anchoring ordinances enacted will expire.

A total of 45 Eco-Mooring Systems are being added adjacent to Belmont Veterans Memorial Pier in Long Beach, California as part of an effort to make the area more boater-friendly. Unlike most piers on the West Coast, Belmont Pier is protected by a breakwater that acts as a barrier reef providing calm waters much unlike the piers in the surrounding area. For that reason it has the potential to become a huge recreational boating destination, said Long Beach businessman Mile O'Toole, and these mooring systems are the first critical steps toward achieving this.

Dave Merrill, founder of ecomooringsystems.com and field expert conducted a three day workshop at the Saba Conservation Foundation to educate their marine park staff in mooring installation and maintenance.

The first day of the workshop was a general education of the subject in a classroom setting. Dave gave an overview of Helix anchors and Boatmoorings.com, acquainted participants with the necessary equipment and how it works, and explained what is required to insure the safety of all participants in these types of Helix Anchor installations. 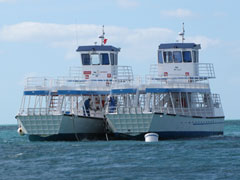 Six years ago Norwegian Cruise Lines needed a way to moor their four cruise ship ferry boats behind their private island Great Stirrup Cay which is part of the Berry Islands in the Bahamas. These boats are used to carry passengers from the ship to their private beaches for a day in the sun and sand. Today, these moorings are still in use as supplemental docking capacity for their new marina.

These 100 ft. long ferries needed a safe, durable system during significant 60 knot weather events that could withstand the heavy tonnage. Boatmoorings.com designed and installed a Helix Mooring System, durable enough to withstand the forces of NCL's fleet during these extreme sea storms. Six years later, after enduring the exertion of storms with winds up to 65 knots, the systems are still holding strong.

70 Eco-mooring Systems to be Installed in Manchester

by By Arianna MacNeill

Now, however, thanks to a program funded through the Massachusetts Port Authority, many traditional moorings — used to secure boats in a harbor or elsewhere — are being replaced by environmentally friendly ones, meaning the moorings and eelgrass can exist in harmony.

Boat moorings in Manchester are owned by the people who use them, town Harbormaster Bion Pike said, so when the Massport project was announced, his department pitched the idea to mooring owners.

"Virtually everyone took the town up on the offer," he said.

Compared to traditional moorings that typically scrape the ocean floor and damage eelgrass, Pike explained that the new moorings, provided by BoatMoorings.com, float and don't damage the ocean's bottom at all.

You scratched my seagrass! 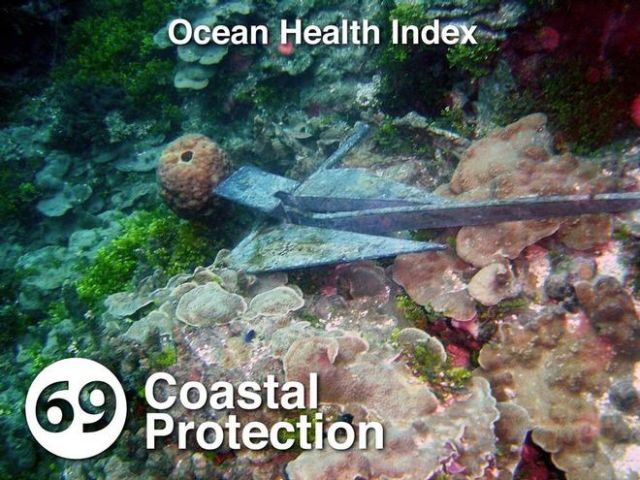 Sailors for the Sea publishes monthly articles that translate the language of marine science into fascinating articles about ocean health.

To learn more about the organization visit Sailors for the Sea

Those who sail come to know the ocean intimately; buoyed by its beauty and the rich life it nourishes, but also saddened by damage from pollution, over-exploitation, climate change or other problems.

Are there things boaters can do to lessen such problems and improve ocean health? What is the current status of the ocean's health, anyhow?

The Ocean Health Index is based on the premise that a healthy ocean provides a range of benefits to people now and in the future. This recognizes that people and the ocean must coexist, because human presence and activities affect nearly all aspects of the ocean and marine life and vice versa. In short, people need nature to thrive; and fostering a resilient, productive ocean will promote healthy sustainable societies.

The Ocean Health Index evaluates the world's oceans according to 10 public goals that represent key benefits of healthy marine ecosystems. Each goal is scored from zero to 100 signifying how well it is doing in achieving those benefits. The scores can be looked at by country and goal, and be averaged to produce a regions overall score.

Boaters have unique opportunities to help with these goals, particularly protecting sea grass and coral reef habitats, both of which provide a remarkable suite of benefits to people and marine life, benefits valued at nearly $12,000 per acre every year.